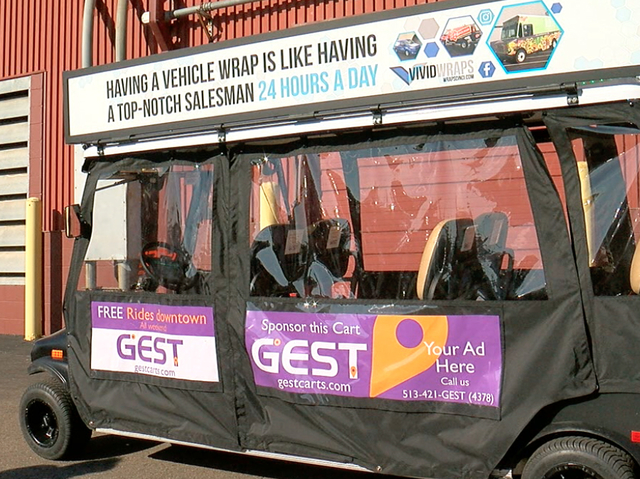 COVINGTON (WCPO) – The Covington City Commission voted Tuesday to approve an ordinance allowing for GEST and other similar low-speed taxi companies — which operate using street legal golf carts — to operate throughout downtown Covington and Mainstrasse, in order to alleviate stress on available parking.

The ordinance got its second reading Tuesday night with no discussion. It passed unanimously.

“My wife and I come down here all the time. We love Covington,” Dye told WCPO after Tuesday’s meeting. “It’s been so amazing how open arms Northern Kentucky has been. It’s unbelievable. We’re super excited.

“We want Northern Kentucky to be a second home.”

Dye previously told WCPO that safety is his number one priority.

“This is not a car. It’s a golf cart,” he said. “I will not take these out if it’s snowing or if it’s extremely hard rain or thunderstorms. I don’t want to put anyone at risk — not only my drivers but just the customers in general.”

GEST would offer its taxi service at no charge throughout the designated area: from the Licking River to Mainstrasse and MLK Jr. Boulevard/12th Street to the Ohio River.

They would also be able to provide service between The Banks, Downtown and Northern Kentucky, Dye said.

“Game days, especially, we get requests all the time for it. We’ll have to say, ‘Sorry, we can’t,’ or, ‘We have to let you out here and you can walk over,” Dye said. “But now we’ll be able to take the bridges over.”

Dye hopes GEST can become another bridge between Cincinnati and Northern Kentucky.

“Over the years, people have kind of segregated Cincinnati and Northern Kentucky. I’ve seen it since I’ve lived here,” the downtown Cincinnati resident said. “Now there’s just so much more to do over in Covington and Newport. You want to come over here.”

City Manager David Johnston said, “We learned long ago, when someone brings a good idea to Covington, we’ll look at it.”