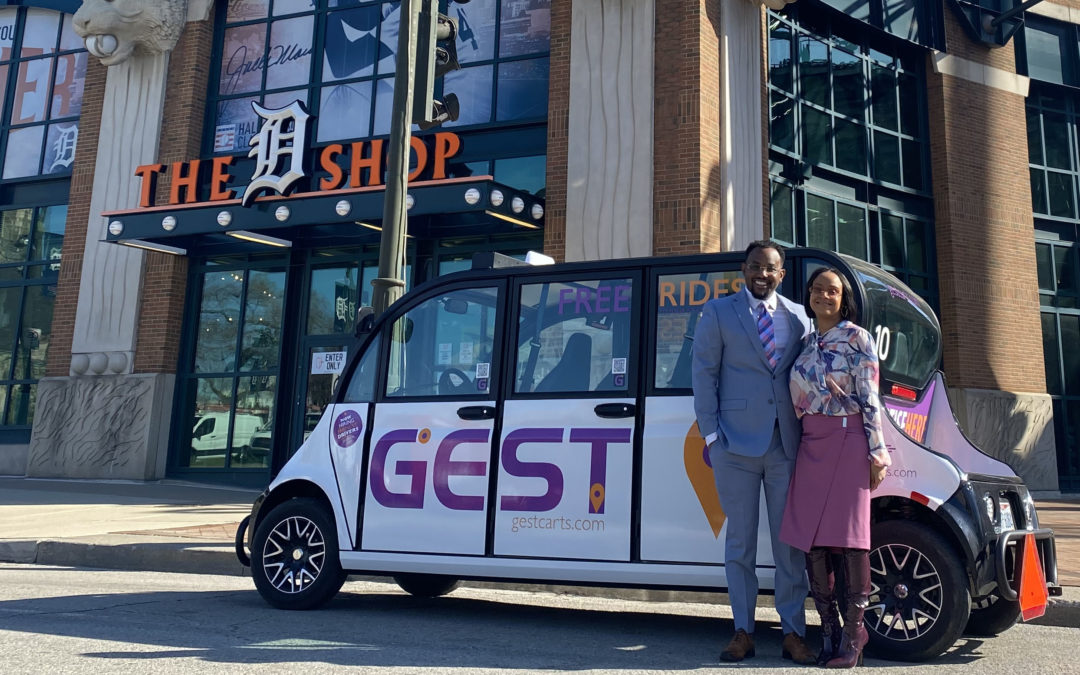 Detroit residents Damon and Kaia Dickens are the first GEST licensees in Detroit.

A new form of transportation is hitting the Motor City.

GEST is a free, on-demand service, with costs covered by advertisers. Businesses can buy ad space on a backlit LED roof rack or custom vinyl wrapping on the exterior of the carts for a monthly fee.

Like other ride-hailing services such as Uber, GEST’s app allows users to request rides and track and rate their driver.

Detroit residents Damon and Kaia Dickens are the first GEST licensees in Detroit.

“Even with all of the growth in entertainment options in the city, the option to get around for free just didn’t exist,” Damon Dickens said in a news release. “We wanted to solve that problem while at the same time giving small and large business sponsors a way to have their brand more visible.”

Service will run 10 a.m.-6 p.m. on Opening Day. Regular hours will be 5-11 p.m. Thursday through Sunday. Rides will be available downtown, in Corktown, Midtown, Eastern Market and the East Jefferson area.

The carts have weatherproof exterior covers and heaters to guard against cold and rain. Each cart can carry five to seven passengers.

The GEST carts are also available to rent for private events, weddings and bachelorette parties at $200 for two hours, according to Damon Dickens, which will help bring in revenue as they work to secure advertisers. The carts are equipped with stereo systems and Bluetooth connections so riders can play their own music during a trip and have fun with karaoke.

The company follows all COVID-19 protocols, including wiping down carts after each use, mask wearing and hand sanitizer availability.

“The (advertisers) make all this happen,” Dickens said. “It’s a good way for them to get their brands out to people who may not see it like they would see on a billboard. If you have a billboard on a stretch of road or freeway, the only people who will see it are people who consistently travel that roadway. With (GEST), those advertisements will be seen by people from the city, the suburbs and all over who come downtown for different events.”

Patrick and Lauren Dye launched GEST Carts in Cincinnati in 2018.

The company looks for local and national advertisers for each licensee, according to co-owner Patrick Dye.GEST, which launched in Cincinnati in 2018 and operates in Chicago, has 28 employees at its corporate headquarters and annual revenue of $5 million. It plans expansion to Charlotte, N.C., and Atlanta.

Shortly after its launch, Dye said GEST averaged 300-500 riders a night in Cincinnati. He expects Detroit to hit similar numbers once the weather improves.

Cost to join the company, which includes licensing fees, purchase of the street legal vehicles and housing the carts, is $50,000-$100,000, Dickens said. The carts are registered with the state and have license plates. Each city also has a phone number associated with its licensee.
Dickens, 39, who has a background in finance, said a desire to support the community as it continues to grow and evolve played into the decision to launch the service in Detroit.

“One day I was scrolling on Instagram and I came across the Cincinnati GEST page,” he said. “I looked them up on YouTube and saw some commercials. I thought something like this would work in Detroit. I gave (Dye) a call. He came to Detroit to see the area, and I explained how I thought it would work.”

Dye said he felt an instant connection with Dickens upon meeting him and believes Dickens has the potential to make GEST a staple in greater downtown Detroit.

“It just sort of happened that way,” Dye said. “We take pride in giving an underrepresented group the opportunity to basically run their own business.”

Detroit meets the criteria GEST looks for as it expands, Dye said. The company looks for major markets where it can operate all year. Being home to teams from all four major American sports leagues makes the city attractive, he said. The multiple bars, restaurants and casinos help, too.

Dye said most advertisers sign one-year contracts, but he would not disclose rates. Dye said the business had really started to take off last year as the COVID-19 pandemic hit. GEST opted to push advertiser payments to the end of the contracts, as the carts were not in operation for stretches of 2020.

Dickens and his wife, who have registered and insured the carts, signed a franchise agreement in 2020. They have purchased two carts to start with an eye toward more. They are working to secure advertisers, but are excited to get started Thursday. Until advertisers are secured, revenue will come from private rentals.

Although there will be no Opening Day tailgating this year and limited fans in attendance, Dickens believes people will still converge on the city.

“We’re taking all those things into consideration,” Dickens said. “You’re still going to have people downtown going to different restaurants, different bars, going shopping. We know how big Opening Day can get. We just want to be a part of that.”

Dye said Dickens getting started without having secured advertisers is not an issue. The focus early on will be making greater downtown residents and visitors aware that GEST is a transportation option.