A new, free way to get around downtown Detroit launching April 1 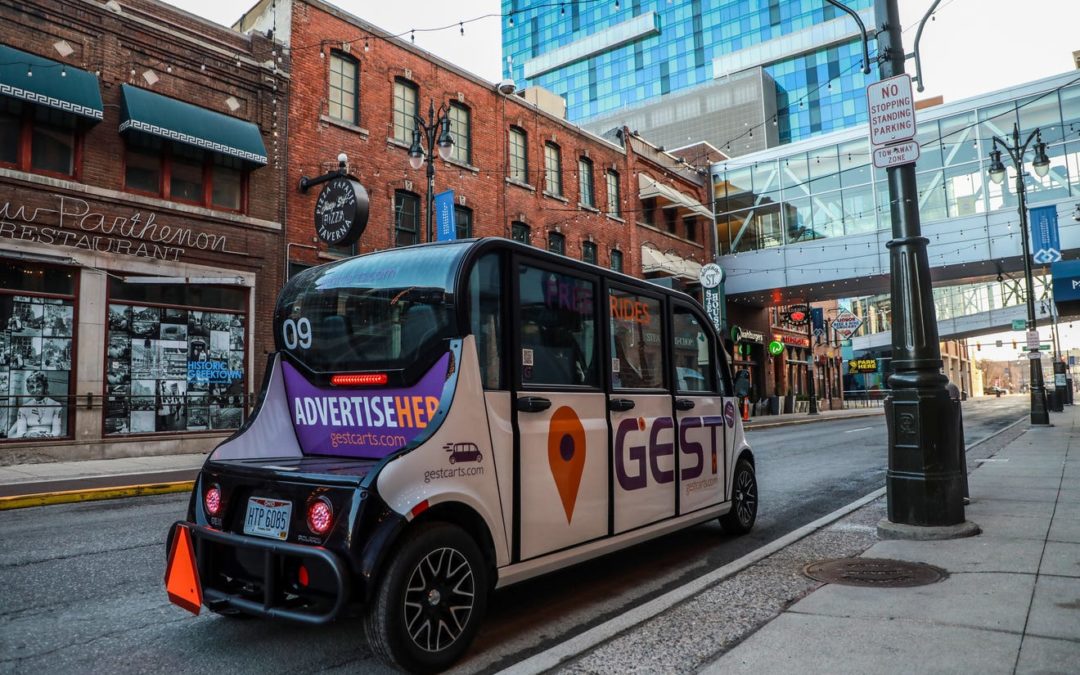 Starting on the Thursday, the Tigers’ Opening Day, you may start seeing a large golf cart driving 25 mph in the streets of downtown.

GEST Carts, a golf cart service, will take you where you need to go in and around downtown Detroit — for free.

The company is a franchise that is already up and running in Cincinnati and Chicago.

Detroit franchise co-founder Damon Dickens felt the new rides would be perfect for his hometown.

“I had seen the GEST brand and the product in Cincinnati and the first thing that came to my mind was this would work in downtown Detroit,” said Dickens, a Detroit native. “It was just a light bulb that went off in my head that this would work at home.”

Dickens and his wife, Kaia Dickens, are both co-founders of the Detroit franchise and the company is now the third operator of GEST Carts.  The graduates of Henry Ford High School said they wanted to be a part of the growth of the city as a Black-owned business providing a free service to the community and its visitors.

Damon Dickens said this service  is perfect for those who may not have had the opportunity to spend time in the city.

“I’m very keen on helping out others,” Damon Dickens said. “Someone could be downtown and not have the funds to pay for parking. We can actually help them out on their day. They might spend more time downtown than they normally would, especially on a sunny day.”

The service is free because it is paid for by sponsors and advertisements that are listed on the company’s app and on the vehicle through the LED roof rack or vinyl wrapping on the carts. There also is an option to rent the GEST Cart for a few hours, which does have a fee.

Riders can request a pickup through the app at a specific location, and the driver will take the rider anyplace in and around downtown, Corktown, Midtown, Eastern Market and East Jefferson. On Thursday, the carts will operate from 10 a.m. to 6 p.m. After that, the rides will be available from 5 p.m. to 11 p.m. Thursday through Sunday. Eventually, hours of operation will expand as coronavirus concerns decrease.

The company, whose acronym stands for Green Easy Safe Transportation, uses electricvehicles that can accelerate up to 25 mph. There will be two carts operating during the launch, and by summer, the company expects to have six to 11 carts in the city. In addition, they plan to hire 20 to 30 drivers, mechanics and staff.

The QLINE stopped operationsduring the pandemic, although it plans to resume operation with no passengers on Woodward Avenue starting Monday. Operations of the Detroit People Mover also have come to a halt. So on busy days in Detroit, people will most likely use  alternative transportation methods like the Detroit Department of Transportation bus system, Uber, Lyft, cab services and now, the GEST Cart.

“We wanted to bring some growth,” Dickens said. “Even with the jobs. I’m definitely keen on hiring metro Detroiters. Given the hard time, we’ve been through a lot in the state of Michigan and in the Detroit area, so I wanted to be part of the growth and at the same time bring jobs to the area.”

COVID-19 protocols are observed in every ride, including a full wiping of the vehicle between each use and a coronavirus health screening for drivers.

Dickens hopes to be able to eventually provide GEST Cart transportation from Detroit to cities like Birmingham, Royal Oak and Ferndale. He also wants to create a way for people to get around in the carts in Ann Arbor.

“I want to be able to have a transportation where we can connect these major cities that (are) right next to each other,” Dickens said. “We can lessen the gap and offer safe transportation between … going to Ferndale, Royal Oak and Birmingham so you can have dinner in one place and catch a show at (the Aretha Franklin Amphitheatre) with the same transportation company.”