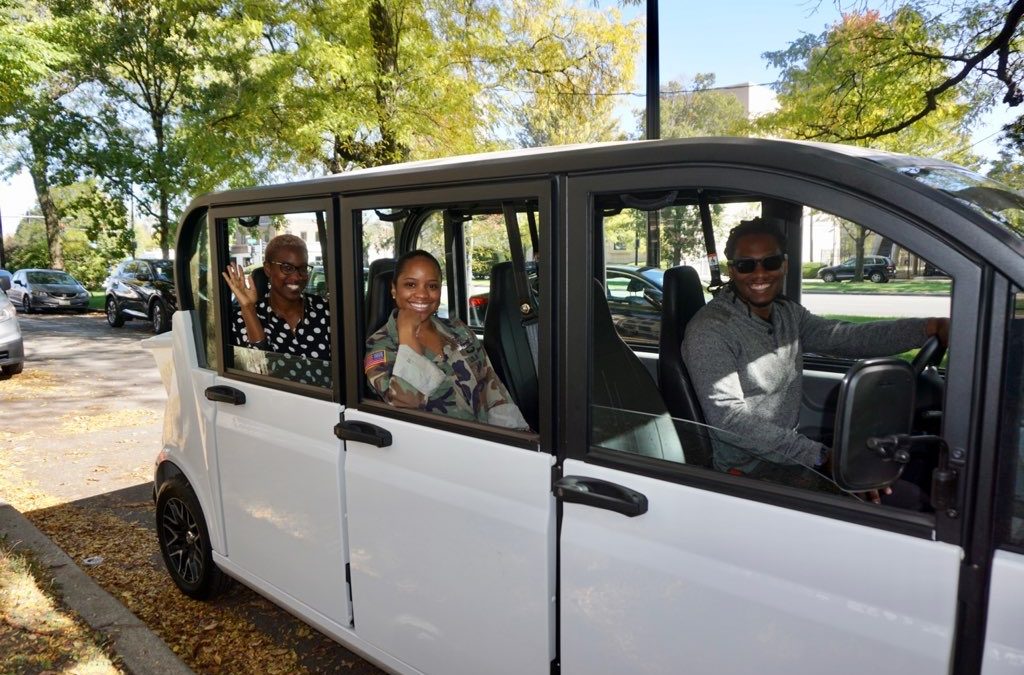 GEST is launching its open-air, electric-powered shuttles throughout Chicago’s downtown area. The company relies on funding from corporate sponsors only, meaning riders can participate in the program at no cost to them. GEST’s two-pronged mission of transporting bargoers and grocery shoppers in food-insecure areas alike makes for a versatile service, especially since rides are completely free to its users.

“We’ve found a blend of two things where we’re needed. One, of course, is the Chicago social scene, but we’re also passionate about serving areas where there is inequity. We’re like Clark Kent by day and Superman by night—we serve two very different purposes,” said Tiffany Shepard, one of the Chicago branch’s owners.

The company launched in a limited capacity this past December in the West Loop and is currently looking for sponsors who want to lock down the limited advertising space on their carts.

“We’ve been having really good conversations with Commonwealth Edison, Fifth Third Bank, Walgreens and some of the professional sports teams,” Shepard said.

Chicago was ranked the 18th worst city in the United States for air pollution in 2019 by the American Lung Association, much of which is caused by vehicle emissions. Electric vehicles play an integral role in the transformation of city transportation from relying on dirty fuels to clean-energy sources, because they produce zero tailpipe emissions. According to the U.S. Energy Information Administration, a gas-powered car emits about 19.5 pounds of carbon dioxide (CO2) per gallon of gasoline burned. Nationwide, CO2 emissions from aviation and automotive gasoline combustion made up 22% of total emissions.

Even when electric vehicles are charged by a port that sources from powerplants that use fossil fuels to power them, emissions are lower because fossil-fueled power plants are more efficient, since they use less fuel per vehicle mile traveled compared to its internal combustion engine analog. Because less fuel is used, there is less pollution emitted overall.

By choosing GEST carts over rideshare services like Uber or Lyft, which are typically gasoline-powered vehicles, consumers can opt for clean vehicle transport and contribute to air quality improvements in the area.

“We offer people an alternative to driving their owns cars, which are usually gasoline powered,” Shepard said.

The structure of the company allows interested customers to book their rides easily through their app or via phone. Shepard says GEST will begin to populate specific areas downtown consistently, so pedestrians are able to associate these streets with GEST. This will make it easier for customers to find them on their own without having to intentionally book their own cart.

“We were very intentional in launching while the city was shut down because it gives a nice, slow ramp-up where we can make sure everything is lined up and ready to go,” Shepard said.

GEST Carts Chicago is black- and woman-owned and is headquartered in Chicago’s Bronzeville neighborhood. The service also is offered in Cincinnati and Detroit via different operators.

Company leaders say they are looking forward to getting started on a larger scale soon, just in time for spring, and continuing to contribute to the city and state goals as an intersection of diversity and electric vehicle transport.